American rock band The Beach Boys recorded "Cotton Fields" on November 18 1968. Fields" in 1968: the track with Al Jardine on lead vocals debuted the group's 1969 album 20/20.
Dissatisfied with Brian Wilson's arrangement of the song, Jardine later led the group to record a more country-rock style version; this version recorded on August 15 1969 featured Orville "Red" Rhodes on pedal steel guitar. Entitled "Cottonfields", the track afforded the Beach Boys' their most widespread international success while also consolidating the end of the group's hitmaking career in the US (although they would enjoy periodic comebacks there). "Cottonfields" would be the final Beach Boys' single released on Capitol Records - the group's label since 1963 - and their last single released in mono. 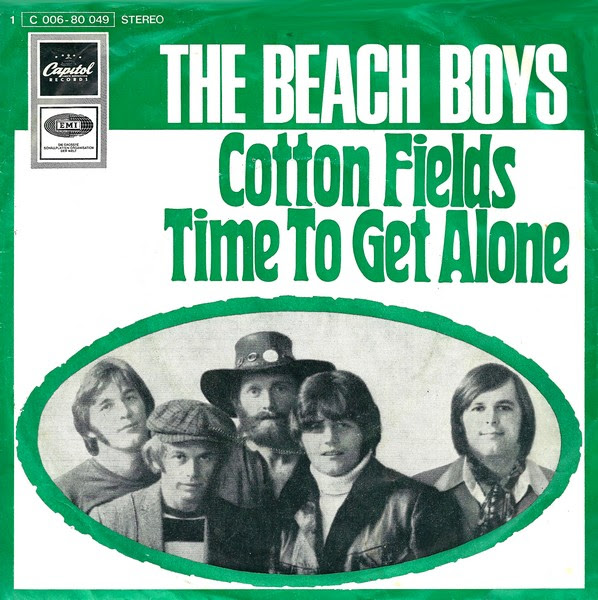 Recorded by Lead Belly in 1940, "Cotton Fields" was introduced into the canon of folk music via its inclusion on the 1954 album release Odetta & Larry which comprised performances by Odetta at the Tin Angel nightclub in San Francisco with instrumental and vocal accompaniment by Lawrence Mohr: this version was entitled "Old Cotton Fields at Home". The song's profile was boosted via its recording by Harry Belafonte first on his 1958 album Belafonte Sings the Blues with a live version appearing on the 1959 concert album Belafonte at Carnegie Hall: Belafonte had learned "Cotton Fields" from Odetta and been singing it in concert as early as 1955. A #13 hit in 1961 for The Highwaymen, "Cotton Fields" served as an album track for a number of C&W and folk-rock acts including Ferlin Husky (The Heart and Soul of Ferlin Husky 1963), Buck Owens (On the Bandstand 1963), the New Christy Minstrels (Chim-Chim-Cheree 1965) and the Seekers (Roving With The Seekers 1964): Odetta also made a new studio recording of the song for her 1963 album One Grain of Sand. The Springfields included "Cotton Fields" on a 1962 EP release: this version is featured on the CD On An Island Of Dreams: The Best Of The Springfields. "Cotton Fields" was also recorded by Unit 4+2 for their Concrete and Clay album (1965). A rendering in French: "L'enfant do", was recorded in 1962 by Petula Clark.