Bolland & Bolland - In the army now

Note: this is the original version, the Quo did it a few years later. 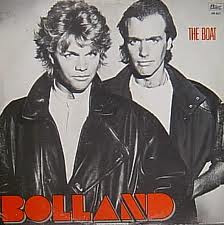 They produced and wrote for artists like Falco (including the No.1 hit "Rock Me Amadeus"), Samantha Fox ("Love House"), and wrote the Status Quo hit "In the Army Now" - which they released under their own name in 1981 and which was also recorded by Gerard Joling. As musicians in their own right they released their first eponymous album in 1975.

Email ThisBlogThis!Share to TwitterShare to FacebookShare to Pinterest
Labels: Bolland and Bolland